Hyperpigmentary disorders like melasma, actinic and senile lentigines and postinflammatory hyperpigmentation are a major cosmetic problem for which patients seek medical advice. These disorders affect populations with darker skin complexion, like Asians and Hispanics, with greater frequency and severity.1 Numerous topical products are available, containing diverse active ingredients to reduce melanin production and distribution. In principle, skin depigmentation can be achieved by regulating the transcription and activity of tyrosinase and other melanosomal proteins, inhibition of melanocyte activation, interference with the uptake and distribution of melanosomes in keratinocytes and an accelerated turnover of pigmented keratinocytes.2 Tyrosinase is the key regulator of melanin production and, consequently, the most prominent target for inhibitors of hyperpigmentary disorders. To date, many substances have been described in the literature as inhibitors of tyrosinase; however, most of them lack the efficacy and specificity necessary for practical applications and, thus, only a few compounds are being used in topical products.3–5 Among these, kojic acid and hydroquinone arbutin are most widely used.6 Skin‐whitening actives have to be applied as a long‐term treatment and may cause various side‐effects, like skin irritation and dyschromia; therefore, it is important to find an effective and well‐tolerable alternative to reduce pigment irregularities and protect against the reappearance. We were interested in evaluating the inhibition of skin pigmentation by well‐known compounds with skin‐whitening activity like hydroquinone, arbutin kojic acid and 4‐n‐butylresorcinol, and therefore compared the efficacy in various in vitro and in vivo assay systems.

Inhibition of human tyrosinase by 4‐butylresorcinol, kojic acid, arbutin and hydroquinone. The L‐DOPA oxidase activity of tyrosinase was determined at various concentrations of the inhibitors to allow for the calculation of IC50 values. Data represent the mean of three independent experiments. 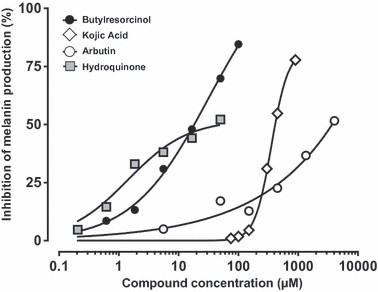 Inhibition of melanin production in MelanoDerm™ skin models by 4‐butylresorcinol, kojic acid, arbutin and hydroquinone. Melanin content of skin models was determined after 13 days of cultivation in the presence of various inhibitor concentrations. Data represent the mean of five independent experiments. 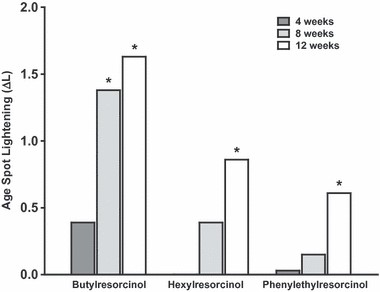 Age spot lightening by 4‐butylresorcinol, 4‐hexylresorcinol and 4‐phenylethylresorcinol. The spots were treated twice daily for 12 weeks with a formula containing the respective inhibitor. Efficacy was evaluated after 4, 8 and 12 weeks. Data represent the mean of 14 subjects. *P  < 0.05: statistically significant vs. the untreated control age spots.

In a second study, subjects applied 1% 4‐butylresorcinol to age spots of the volar forearm using a spot applicator. Control age spots were treated with a spot applicator containing the vehicle. Already after 4 weeks of treatment, the treated spots were lighter than the control spots. Improvement continued over the entire treatment period, and after 16 weeks some of the spots were undistinguishable from the surrounding skin (Fig. 4). After treatment, the age spots were monitored for several weeks. Even after 4 weeks without treatment, the age spots previously treated with 4‐butylresorcinol were still significantly lighter than the vehicle‐treated spots.

Clinical Study – monitoring of a treated age spot during treatment with a spot applicator. Photographs of age spots were taken at baseline and after 8, 12 and 16 weeks of treatment. The arrows mark the treated age spot. For comparison, untreated spots were included in the photographed area.